Anatomy of a Book Cover Design – The Revolt

“This cover was commissioned by UDG DesignWorks out of Sisters, Oregon, for a Christian Teen self help workbook by Josh McDowell, called The Revolt, published by Tyndale Publications. UDG found me through a link to my site from MetronPress.com, where I was involved with a graphic novel based on the biblical story of Samson.

In this first version, I went right for it with finished pencils without showing any preliminary sketches to the client. I felt confident in the piece, but as you’ll see the progression in each stage, the final piece is much stronger in composition and form.” – Kevin Conrad

They asked for:
“An illustration rendered in the youth-oriented style of a slick graphic novel. Have about five teenagers,both boys and girls, standing in the center of the illustration. We are at a fairly low angle, looking slightly up at them to give them a heroic dimension. The kids are in a tight semi-circle. One or two are facing us,looking with heroic, challenging, confident, expressions just above us as if at an enemy or threat that is attacking them. The rest of the kids are facing outward from the semi-circle with the same confident, brave, heroic, almost joyful expressions.

Although the client loved the first piece, the publisher asked for a few changes. Remember, this was done for a Christian publisher! They felt most of the faces looked a bit too old and the figures were a bit overdeveloped. They liked the slenderness of the girls, but felt the Asian girl’s shirt was a bit too form fitting. Outside of the White teen, they felt that the poses and expressions didn’t depict any real threat of danger. They asked me to remove the walls and make the threats swirling around them more ominous and threatening and to add more drugs, a sex education book and condoms.

They suggested a severed hand holding a syringe, I opted for a skeletal hand bleeding off of the page. I moved some of the ‘threats’ per their request also. They thought a threat coming from behind might look good, so I changed the ‘ape’ skull into a backdrop…looked cool, but it loses it’s evolutionary stance in a face forward position! 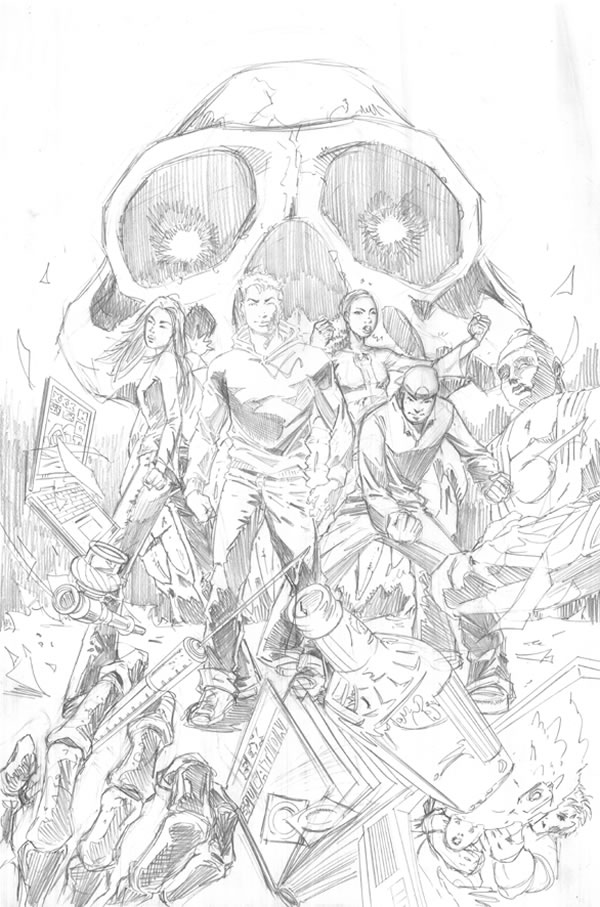